Notification for our Magazine Subscribers 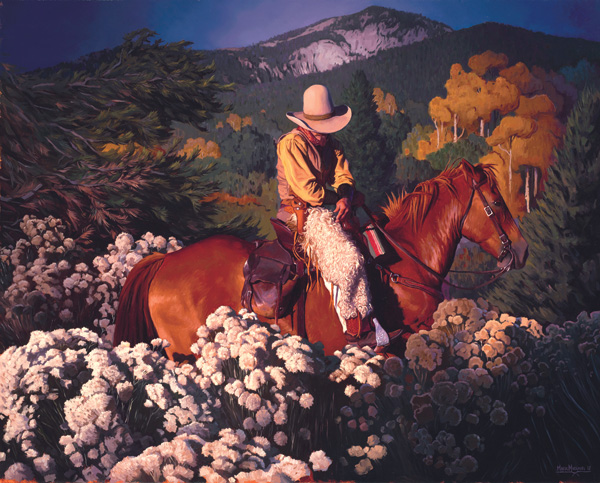 Two bone-tired young cowboys descend a cactus-studded slope toward an iconic western landscape of red-rock pinnacles and winding canyons. They are not so much riding their horses as being patiently borne by them. Massive storm clouds billow behind them, threatening a downpour that may arrive before the men reach their destination.

This majestic 5-foot-wide painting by Mark Maggiori, titled WEST SIDE OF THE RIO GRANDE, so impressed the judges at this year’s Masters of the American West show at the Autry Museum that it received the Don B. Huntley Spirit of the West Award as the most outstanding work in cowboy subject matter. Despite the acclaim Maggiori has been earning recently, that recognition was surprising for multiple reasons: Not only was it the artist’s Autry debut, but he is also a relative newcomer to American western subjects. The 41-year-old is a Frenchman who, until a moment of revelation and a leap of faith less than five years ago, had never considered painting cowboys.

“I took a chance back then,” says Maggiori. “This was something I had to do.” 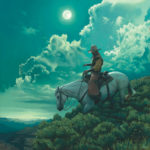 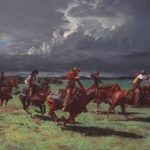 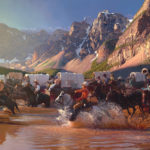 Maggiori’s background may not have clearly predicted his future calling or phenomenal success. But it’s possible nonetheless to trace subtle indicators of the painter he is today.
“I guess I was pretty good at drawing at a young age,” he reflects. “When my mother picked me up my first day of kindergarten, the teacher had put my drawing on the classroom wall. I don’t remember what it was, but the teacher told my mom I was very good.” That classroom was in his hometown of Fontainebleau, southeast of Paris, where Maggiori grew up as the middle of three
children of Robert, a philosophy professor and author, and Helen, who taught French, Latin, and Greek. Early in his school years, he enjoyed drawing at home, filling sketchbooks with pictures of robots and spaceships. His parents, however, “wanted me to have a real job,” urging him toward more academic pursuits.

“But I wasn’t really good at school,” Maggiori continues, laughingly explaining that his “monomaniacal” nature led to obsessions first with playing soccer, starting at the age of 7, and then, by his mid-teens, with skateboarding. That pursuit, in turn, fostered a fascination with America, particularly the skateboarding culture of Los Angeles.

During the summer of his 15th year, Maggiori gained his first up-close-and-personal experience of America when his uncle Claude, a successful magazine and newspaper art director, took him and Mark’s 15-year-old cousin Leon on a summer road trip from New York to San Francisco, with stops along the way at western landmarks. “That month changed my life,” he says, “implanting America in my brain.” 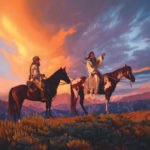 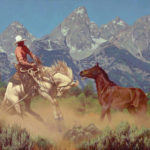 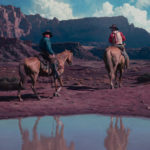 When the time came for college, however, young Mark still wasn’t sure of his goals. He enrolled in some history classes at the Sorbonne but dropped them within a month. By then, he had picked up the guitar, “and I just wanted to make music with my friends and hang out with girls,” he says. Finally, in 1997, his uncle convinced him to try classes at the Academie Julian, a venerable private art school in Paris. “That was life-changing for me,” Maggiori recalls. “All of a sudden, my world opened to so many options and possibilities.”

Now a committed student, he stayed in art school for the full four-year course. Along the way he gained experience in animation, interning at the Paris studios of Disney, where he was involved in the 1999 film Tarzan. “I had dreadlocks at the time, and so did Tarzan, so the main animator used me as a model to see how the dreadlocks moved,” he says.

Upon graduation, Disney offered him a job at its California headquarters. By then, however, another passion had, quite literally, taken center stage. In 1997, Maggiori and his friends had formed a band called Pleymo, writing and performing “numetal,” combining heavy metal with other genres including hip-hop and grunge. After releasing their first album in 1999, they signed with Sony Music in 2000. By the time their second of four albums came out in 2002, they had begun playing at festivals across Europe and Japan, with Maggiori as lead vocalist. At the same time, he had also begun a compatible career directing music videos. So, he says, “the idea of being stuck in an animation studio somewhere in Burbank wasn’t appealing to me anymore.” 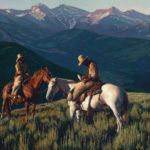 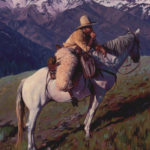 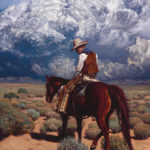 Eventually, the Pleymo years ended, with the band going on hiatus in 2007. (This summer, however, they’ve reunited for a 20th-anniversary tour in Europe.) Maggiori continued to direct music videos, while exploring opportunities to helm documentaries and feature films. In 2011, he moved to Los Angeles, where he met and fell in love with multimedia artist and creative director Petecia Le Fawnhawk, whom he married in 2012. And he developed a particular interest in rural America. “Every time I had a little money,” he says, “I’d go somewhere like Texas or Louisiana and take photos of Americana,” he says. “And that’s how I discovered rodeos.”

That interest led him, in late 2013, to take photos at the International Finals Rodeo in Oklahoma City. His father-in-law suggested he check out the National Cowboy & Western Heritage Museum while he was there. So Maggiori did, and his first encounter with its collection of historic and contemporary western art, much of it produced by participants in its annual Prix de West Invitational, was revelatory. “It was like I was struck by lightning—the storytelling, the American myth, the lighting, the clothing, everything about the cowboys in those paintings!” he remembers. He left with one laser-focused goal: “This is something I want to do.”

Back home, he began researching the market, which included reading Southwest Art. “I realized there was a whole western art scene. I wanted to be part of it.” So, he says, “I took a big step into unknown territory.” He and Petecia moved to her mother’s house in Kingman, AZ, and, with the same kind of monomaniacal dedication he’d always shown, Maggiori began painting in a backyard shack. 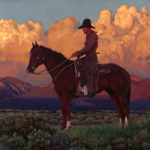 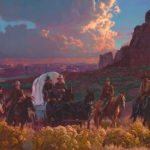 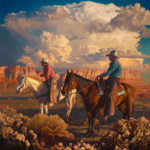 Seeking to jumpstart his new career, he posted his early efforts on Instagram, and his following boomed (today it exceeds 65,000). That quickly led to a connection with successful western artist Logan Maxwell Hagege, who invited Maggiori to meet at the respected Maxwell Alexander Gallery in Los Angeles, directed and owned by his brother, Beau Alexander. “I put simple wood frames on four of my paintings, loaded them in my car, and drove from Kingman to LA,” Maggiori remembers.
“Logan and Beau welcomed me, we talked, and Beau put my paintings on the wall for 10 minutes.” And then, to Maggiori’s astonishment, Alexander bought all four works. “Soon after that,” he adds, “I heard that Bruno Mars had bought one of those paintings.” Another top western gallery, Gerald Peters Gallery in Santa Fe, signed him on a few months later. By October 2015, a painting by Maggiori landed on the cover of Southwest Art.

His successes continued mounting quickly: the Patron’s Choice Award in his first big event, the 2016 Night of Artists show at the Briscoe Western Art Museum in San Antonio; the Sam Houston Award for Painting at the same show the following year; and now, this year, his major recognition at the Autry.

These days Maggiori immerses himself in a field and subject matter that feel as if they’ve chosen him. While painting, he incessantly listens to audiobooks about the West. “I’m actually catching up big-time with American history, and the more I listen, the more I get ideas,” he says. Meanwhile, he continues to travel the West, gathering landscape photos and often meeting up with other artists for organized photo sessions with Indians wearing authentic garb. 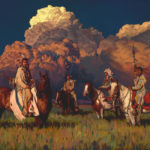 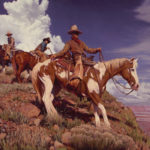 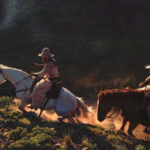 Back in his studio, he says, “I go through my photos and start sketching.” His experience as a director and animator has made him especially adept with Photoshop, which he uses to refine his designs before heading to the canvas. Using a pencil or charcoal, he’ll quickly transcribe the composition. “And then I start painting, with most works taking two to three weeks to completion, including drying time,” he adds. Maggiori pays particular attention to rendering his clouds, which have won him special praise for their luminous realism. “Like a chef usually doesn’t invite you into the kitchen, I don’t want to tell how I do it,” he laughs, revealing only that he uses “a little bristle brush” and spends “hours blending all the colors to make a cloud look smooth and fresh.”

That attention to detail reached new heights in another work Maggiori exhibited at this year’s Autry show, THE CROSSING. Depicting a wagon train fording a river in a mountain valley fringed by snowcapped peaks, the stirring scene tried the artist’s own seemingly boundless patience and focus. “After I finished the mountains, I had to put the whole bottom part aside for maybe two months,” he says. “Then, one morning, I told myself to just do it, step by step, like climbing a gigantic staircase. It took me maybe three weeks of long, hard, sweaty days and lots of coffee. But it was one of those epic paintings I want to do once in a while.” 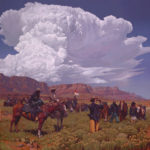 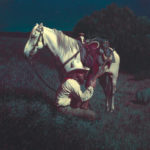 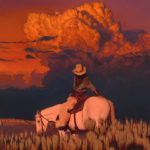 His ultimate goal is to please and reward his ever-growing audience. “It’s encouraging for me to see the thousands of followers I have on Instagram now, who write to me every day. That’s amazing, and it makes me feel so good,” he reflects. He feels he best serves both himself and his fans by “never being boring, and never being bored. I always want to stay excited and to be able to put my excitement for the West into my paintings.” 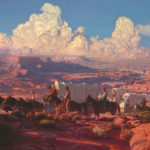 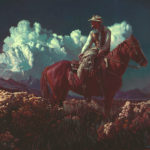 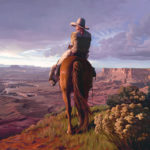