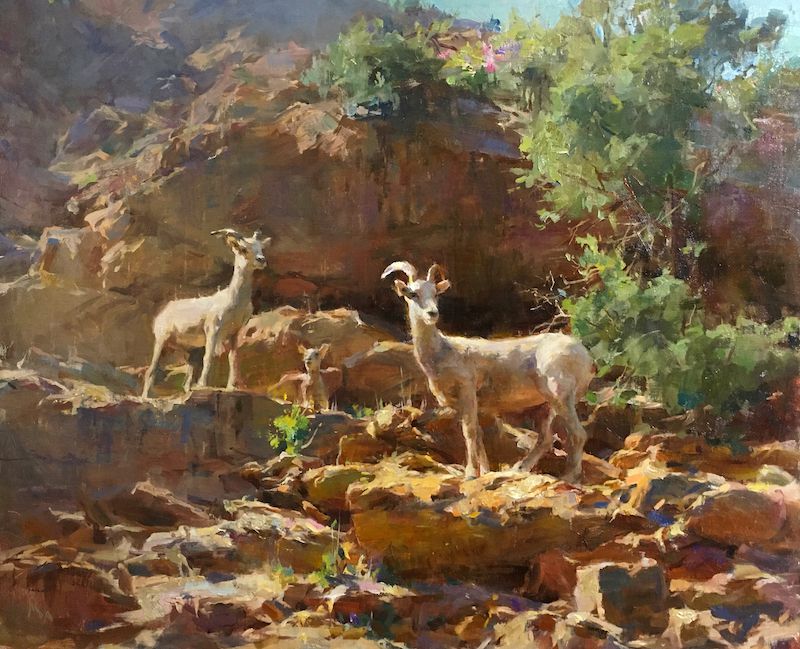 This past April, at the opening reception for the 30th annual National Juried Exhibition of the Oil Painters of America, the Gold Medal Award went to Kyle Ma for ZION BIGHORN SHEEP. A dramatic painting of three animals on a rocky escarpment, it won admiration for its masterly, complex interplay of shapes in light and shadow. Along with the coveted award, Ma received a check for $25,000.

Any artist would consider such recognition a highlight of a long, successful career. Previous Gold Medal winners have included such well-known names as Mian Situ, Dan Gerhartz, C.W. Mundy, and David Leffel. And that made the moment all the sweeter for Ma, who had celebrated his 21st birthday just a few weeks earlier.

It might be easy to label Ma a prodigy, considering he was showing in respected galleries and winning awards by his mid-teens. Yet, considering the origins of that term, it seems almost inadequate to describe the artist: Prodigium, the Latin source, means “an omen or a sign of something to come.” Ma, on the other hand, has most definitely arrived. 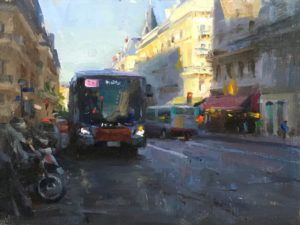 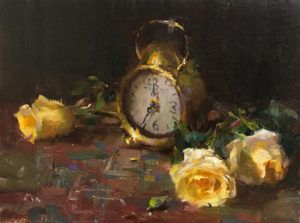 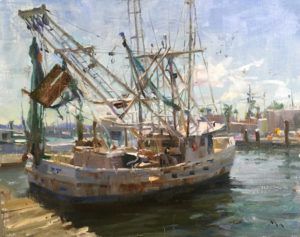 Ma’s talent first showed itself when he was 2 or 3 years old. Growing up in Taipei as the only child of a software-industry consultant and a stay-at-home mom, he began drawing “as soon as I was able to hold a pencil. What stands out mostly in my memory,” he says, “was that I had an interest in trees. I would observe them and then draw different types.” His parents supported and nurtured his budding abilities with occasional after-school art classes, although these were primarily focused on fun rather than instruction.

The trajectory of Ma’s art education changed, however, in 2010, when he and his parents were able to move to the United States under the Diversity Immigrant Visa Program. They settled in Austin, TX, home of Dell computer company, for which his father had done some work. Ten-year-old Ma experienced some culture shock. “Though I had to take English classes in school back in Taiwan, it was a lot different at first to be in an environment where nobody understood Chinese,” he says.

Meanwhile, Ma found himself more and more wanting to learn another form of communication: the visual language of oil painting. “Based on what I saw in museums, I had these ideas of what I wanted to achieve. But I didn’t have the technical skills, so I was getting frustrated with my own work,” the artist remembers. A year or so after arriving in Texas, however, his parents found the respected local painting teacher Elizabeth Locke and enrolled their son in small-group classes with her once or twice a week. 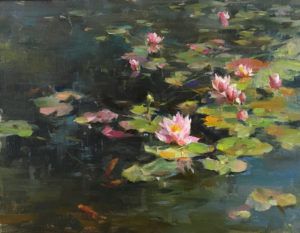 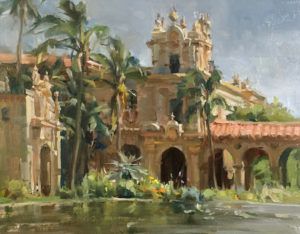 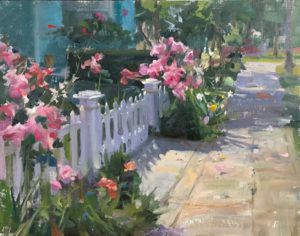 “She just started from the beginning, teaching me to see my subjects without any preconceived ideas,” says Ma. “Before I met her, I was mostly painting from imagination. I wasn’t really spending a lot of time observing nature and seeing how things actually are.” By way of example, he recalls a copy he was painting of a landscape by the late-19th-century classical Russian artist Isaac Levitan. “I struggled with mixing the color of the leaves on a tree in late-evening light, and I couldn’t figure out what kind of green to mix. She came over and showed me that it was actually a grayish orange color. If you forget about the idea of how things should be, you can start seeing how they actually are.”

After he’d studied with Locke for a year and a half, she gently suggested that Ma was ready to “do my own exploration,” he says. He continued expanding his knowledge, reading books by John Carlson and Richard Schmid and watching Schmid’s instructional videos. He also took two painting workshops with Quang Ho. “He taught me to think about making every shape in a painting specific, with a purpose behind it,” Ma says about Ho. “I learned that once you have the fundamentals of painting, there’s so much room to explore different visual ideas.” Ma also immersed himself in works by masters of the past through books and museums.

At the age of 15, he earned his first gallery representation. “In 2014,” he says, “I was visiting Jackson, WY, and went into the Wilcox Gallery because I recognized the name.” Painter and gallery founder Jim Wilcox had designed the easel Ma used. “I chatted with his son, Eric, and told him about my art.” The following year, back in Jackson for a workshop taught by Scott Christensen, Ma stopped by again, this time bringing along some of his paintings, and Wilcox Gallery welcomed him into its fold. Over the next two years, other leading galleries followed, along with membership not only in OPA but also the Salmagundi Club, the Plein Air Painters of America, and the American Impressionist Society. 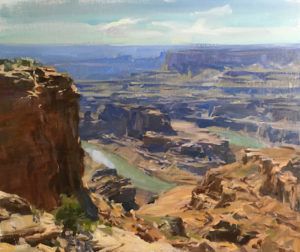 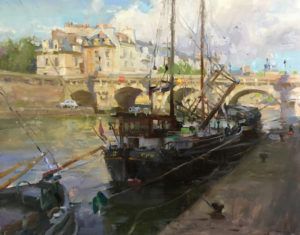 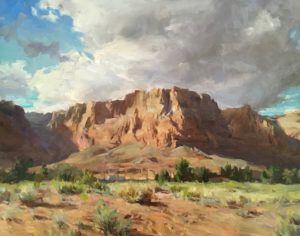 At the same time, Ma was also a student at Vista Ridge High School in Austin’s Cedar Park suburb. He joined the marching band and played the euphonium, an old-time brass instrument that’s a cross between a trumpet and a tuba. He excelled in his classes and graduated in the top 6 percent of his class, earning automatic admission to the University of Texas at Austin.

Anyone assuming Ma majored in art at UT would be wrong, however. “I chose to study geology because I’ve always been interested in learning about the Earth,” he explains. He also felt a close connection between those studies and his lifelong pursuit of painting. “They’re both about the process of observation and combining it with your own knowledge to gain as much as you can from those observations.”

Judging by Ma’s recent artworks, both his knowledge and his powers of observation—not to mention his skills—have continued to grow. SUNLIT PASTURES, portraying a cluster of grazing cows on a gloriously bright day, won first place in the animal category of the Art Renewal Center’s 15th International Salon competition. Along with other winners, the painting was exhibited at Sotheby’s New York in July and goes on to Barcelona’s European Museum of Modern Art from October to December. 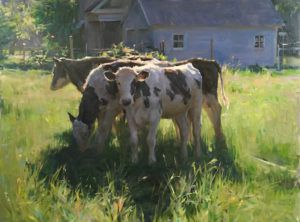 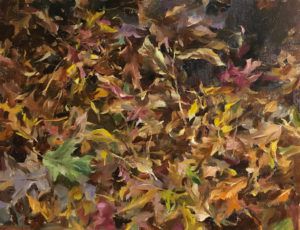 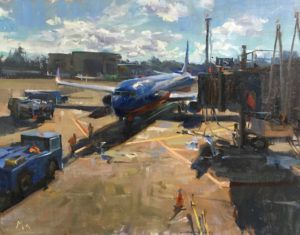 But Ma’s subjects range far beyond farmyard bovines and wildlife. Even a mundane view of planes and taxiways finds dynamic beauty in his NOON AT NEWARK AIRPORT, based on a smartphone photo he snapped while returning home from a family trip to New York. “As a painter, I think it’s important that I’m able to get inspiration from things around me in everyday life that a lot of people tend to miss,” Ma says. Not surprisingly, the geology student found a wealth of visual wonder at Dead Horse Point State Park in Utah, viewed on another family trip. “It was a great challenge to simplify a scene with so much complexity, including a sense of mist in the distance, so that it makes sense as a painting.”

With so much variety in his subject matter and a dedication to learning more about art, it comes as no surprise that Ma does not go about creating all of his works in the same way. “I kind of take a different approach with every painting,” he says. Some start from plein-air sketches, others from reference photos, and still others draw on both sources. He may sketch a composition onto his primed canvas first or begin painting directly, alla prima. Always, he revels in oil paint’s textural qualities. “Hopefully, from across the room, you see the beauty in the overall design and shapes and color harmony,” he says. “And then there’s the beauty you see when you get close and notice the brush strokes.”

When he graduates next year from UT, Ma plans to become a full-time painter. He wants to study human anatomy with the goal of trying his hand at “more ambitious portraits and figurative works,” subjects he has already explored. He hopes to visit Europe, especially Venice, to create his own visions of scenes long beloved by great painters. And he will likely attempt larger canvases that “would look really loose and free up close, but when you step back they look very realistic and fairly detailed. That’s going to be an interesting concept to strive toward.” Considering how much Ma has already strived for and achieved by the age of 21, the outcome of those efforts will no doubt be prodigious. 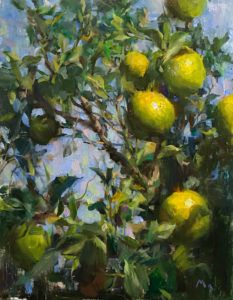 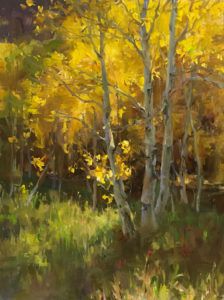 This story appeared in the August/September 2021 issue of Southwest Art magazine.