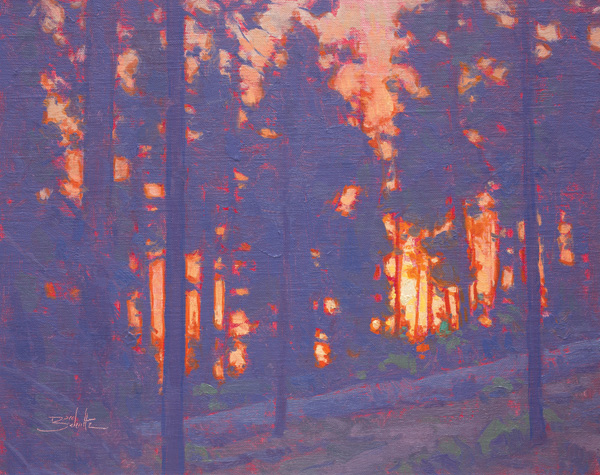 CALIFORNIA ARTIST Dan Schultz paints the world around him as a form of personal expression and as an homage to the land that provides him with infinite displays of wonder. He tells his story through color as he seeks to convey both the apparent and the underlying vivacity contained in the land at a precise moment in time.

Schultz has spent his life amid the vast splendor of the untainted American landscape: first in the panoramic expanses of New Mexico, then near the mountains of Colorado, and now in the rich fields and forests of California’s Ojai Valley. He was born in Albuquerque and spent his early childhood in rural New Mexico. Though both his parents played instruments and supported arts and culture in general, there weren’t many local opportunities for young Dan to encounter visual art. That changed when his family moved to Colorado during his high-school years, and he got a proper introduction by visiting museums and enrolling in art classes.

His first taste of the fulfillment art could bring came when he entered a pen-and-ink drawing into a statewide arts competition and won first place. His piece progressed to the national level of the competition, where he took the top prize again. It was the first time Schultz had shown his work publicly, and the experience quickly made him realize that art could be an academic pursuit and a possible career.

After high school Schultz attended Pensacola Christian College in Florida, where he majored in commercial art. “I got what I felt was a really strong foundation in drawing and a good introduction to painting,” he says of his time in college. After graduation, he returned to Colorado and started working as a graphic designer. At the same time, however, he was developing a drive to discover more about fine-art painting, and eventually he enrolled in classes at Cottonwood Art Academy (now Cottonwood Center for the Arts) in Colorado Springs. As he honed his technical skills and developed his painting style, more and more Schultz gravitated toward fine art as a profession. 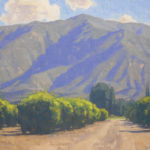 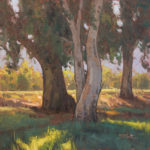 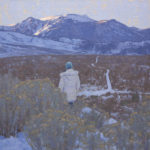 In 2005, he left the graphic-design world and entered the fine-art arena full time. After several years devoted exclusively to painting and teaching at Cottonwood—where he had been hired as the school’s youngest painting instructor—he still wanted more from his professional life, so he decided to try his hand at running his own gallery. Though the task was daunting, the prospects of having direct interaction with his patrons as well as a space where he could paint on-site appealed to him.

Almost a decade ago, compelled to explore new horizons and drawn to points west, Schultz and his family pulled up stakes and moved to Ojai, CA, where he opened Dan Schultz Fine Art Gallery & Studio. “I liked the feel of Ojai,” says the artist, who just celebrated nine years in his down-town storefront. As the sole proprietor, he strives to maintain balance between running his business and making art. He has an easel set up in the gallery, which allows him to paint when the opportunity arises, but he also reserves time outside of gallery hours to work en plein air several days a week.

He appreciates being able to connect with people who come into the gallery, whether as a planned destination or a spontaneous trip. “I never know what might happen on any given day,” he says. One example that stands out is the day Mick Fleetwood of the band Fleetwood Mac wandered into the gallery and ended up purchasing a number of Schultz’s landscapes. He has since become a repeat client.

Running his own gallery also allows Schultz to hear firsthand how his art impacts viewers. One client shared with him that she had found great comfort by looking at an image of one of his paintings while undergoing medical treatments. Once she was able, she added the actual painting to her collection. “It’s really exciting when you get to see something that you made encourage somebody like that,” Schultz says. 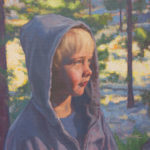 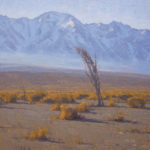 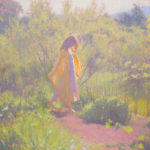 IN OJAI, SCHULTZ draws creative inspiration from the region’s wealth of captivating scenery, including fields, orchards, and mountains, all cast in the unmatched light and atmosphere only California can offer. “There’s a lot of stuff to paint here,” he says, and the promise of a future composition is never far away. Whether hiking just outside the city with his easel or biking with his camera, Schultz never fails to find some arrangement of shapes or cluster of hues that spark his interest.

His move to California inspired the artist to change the way he handled color in his work. “California is blessed with this really atmospheric airiness,” he says, and for him, capturing that on canvas meant working in a brighter, high-key palette. This allowed him to more effectively translate the intricate dialogue between color and light, and to communicate the vibrancy of the environment.

Schultz’s compositions aren’t always a direct representation of nature but a reflection of what he’s exploring with color. As such, sometimes he paints literal colors, while other times he pushes the hues to be brighter or more intense, amplifying the light as if he’s peeling off layers to reveal light trapped inside. “It’s made me feel like I can exercise some more creativity, rather than matching what I see or copying it down,” says Schultz about this approach. “I’m able to take what I’m seeing but manipulate it toward this color range that I find intriguing.”

His series of forest sunset scenes, inspired by a camping trip to Sequoia National Park, embodies this idea. Simplified tree shapes sizzle and dissolve, awash in fiery light emanating from the horizon. Likewise, his recent vignettes of mountains seen from his vantage point in Ojai display intense shadows of blue and purple juxtaposed with equally intense sunlight in the foreground. In these instances, Schultz uses color to depict and define, and also to stylize just enough to add an extraordinary lucidity that engages and excites the eye. 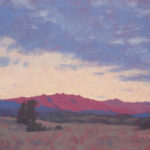 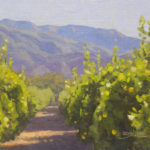 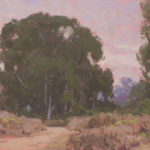 Schultz divides his time equally between plein-air and studio painting, and he credits his time spent working outdoors for helping him keep a firm grasp on interpreting the magic of nature in two dimensions. “I think [plein-air painting] really does teach me a lot still about the real thing,” he says. “It informs my mind so that, when I am working in the studio, I can rely on some of that knowledge of what it looked like outside and how to incorporate some of those ideas.”

Schultz first learned to paint outdoors during classes at Cottonwood, and he found it rather challenging at first. But he knew it was the direction in which he needed to go, and he wanted to grow. “It kept gnawing at me,” he explains. “I thought, ‘I just have to push myself and see if I can get a handle on this painting outdoors idea.’ Working from life teaches you more than just reading about it or working from photos. You really do learn more about seeing the real colors and understanding how light works.” He credits his instructors, accomplished plein-air veterans Skip Whitcomb, Matt Smith, and Chuck Mardosz, with helping him realize the importance of physically occupying the space you paint.

Schultz’s approach to painting is largely technical, so when he’s considering subject matter, he most often responds to compositions and designs that intrigue him, or the way certain shapes or colors behave in the light, rather than the overall essence of the place. Here, his commercial-art training serves him well, as he quickly ascertains how effectively visual elements interact with one another in a given space. In this vein, Schultz’s paintings originate from a point of technical focus and expand from there.

He does have an emotional connection to the world that inspires him, even though that relationship doesn’t necessarily drive his compositions. In fact, Schultz is most intrigued by how viewers connect with his work through their personal lens and experience. In that sense, every painting has an infinite range of emotional power and potential. 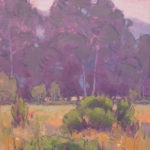 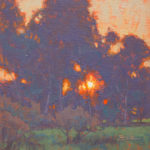 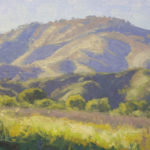 SCHULTZ CONSTANTLY works to refine every aspect of his art, taking on composition, brushwork, light, color, and other facets one at a time. “Continual practice is so important,” says the artist, who, despite his years of experience, knows there is always more to learn. One such evolution occurred after a visit to a retrospective exhibition featuring the work of beloved California Impressionist William Wendt (1865-1946) at the Laguna Art Museum.

Schultz was struck by the way Wendt applied his paint, and that observation helped Schultz resolve a stylistic question he had been wrestling with. “I could see the joy that he was putting in,” says Schultz. “It really started to free me from that feeling that I was stuck in this super-realistic place.” From that point on, Schultz was able to depart from a course of painstaking editing on each painting and return to an earlier practice of employing outlines to simplify and define, while energizing the surrounding elements. “It allowed me to do more with less,” he sums up. “It was a really important turn for me.”

Schultz does his best to stay immersed in the act of painting, whether he’s working in the back of his gallery or participating in a weeklong plein-air event. “There’s a lot to learn and explore,” he concludes. 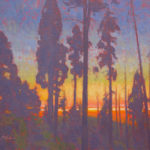 MORE RESOURCES FOR ART COLLECTORS & ENTHUSIASTS
• Subscribe to Southwest Art magazine
• Learn how to paint & how to draw with downloads, videos & more
• Sign up for your Southwest Art email newsletter & download a FREE ebook