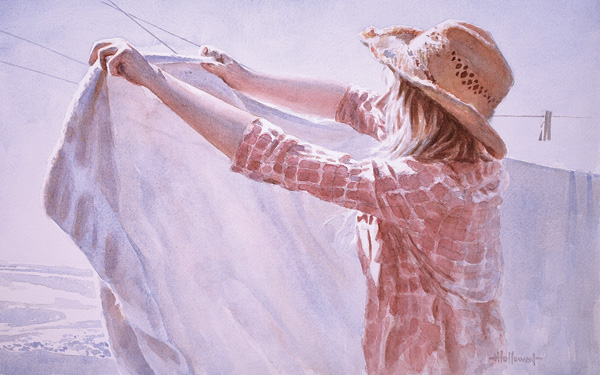 THE FIRST THING to know about paintings by Israel Holloway is that they tell the story of his life, as well as the lives of other folks who call Colorado’s Yampa Valley home. For Holloway, the art of painting is all about inner responses to the outer world, whether it’s his world or his subject’s world. “More often than not, I see how my painting reflects my life after it is finished,” he says.

Take his recent work CLOSE AT HEART. A young woman in a sundress, sporting a cowboy hat and holding a gun, stares down at the ground as if lost in thought. Holloway explains that although the painting depicts his daughter, Hannah, the artwork is more about him and how he felt when she left home for the first time. “I could feel an emptiness creeping up inside. And like most fathers, I worried that maybe I had not played with her or listened to her enough,” Holloway says. “For me, this piece symbolizes wanting to protect her as she goes out on her own and wanting to keep the memories of her as close
as possible.”

As a western painter, Holloway need only step outside his front door to find inspiration—the Yampa Valley in northwestern Colorado is cowboy country, and his artistic mission is to portray a sense of place on today’s frontier. “I am surrounded by the real West,” he says. “If I need references when I draw or paint, we have real cowboys and cowgirls and wild horses. I want to capture it all while it is still here.” 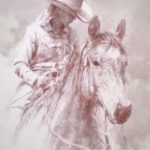 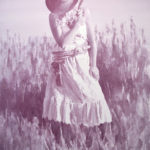 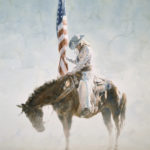 For reference material Holloway shoots thousands of photographs of the rodeos, ranchers, and riders in his corner of the world. In HUMBLED AND PATIENT, for example, the artist depicts a scene from an annual tradition in the region, the Sombrero Ranches’ Great American Horse Drive. Every May, working cowboys and cowgirls drive some 400 horses from their winter pastures in a remote area of northwestern Colorado 60 miles east to ranch headquarters for the summer. In the painting Holloway captures a moment from the second day of the drive, when the caravan stops for lunch in the small town of Maybell and several riders move to the front of the herd to temporarily keep it from moving forward. “These riders usually get their food last, and their horses are watered last,” he says. “I think this piece may reflect some of the adversity I experienced growing up.”

Holloway is primarily known as a watercolor artist; the medium, he says, best expresses his voice. He relishes letting the transparent watercolors build up in thin layers and mix on the paper. He describes the process as “a dance between human intention and the uncontrollable nature of water.”

But Holloway is not afraid to exit his comfort zone and explore new directions. For both CLOSE AT HEART and HUMBLED AND PATIENT, he traded in his watercolors for wine. Several years ago, he was asked to submit a work to a local fundraiser that also featured a wine-tasting event, and the idea of using wine as a medium took root in his imagination. He experimented with pinot noir, merlot, and cabernet sauvignon; many turned a red-orange color that he didn’t like. He eventually settled on a two-year-old Robert Mondavi merlot because it yielded a lush shade of violet when applied to cotton watercolor paper. “Red wine contains tannins and chromogens, organic substances used to make ink and dye,” Holloway says. “It’s challenging to use compared to watercolor because it stains like ink and it can’t be lifted out or moved around.” 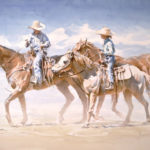 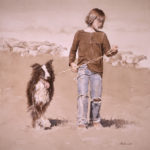 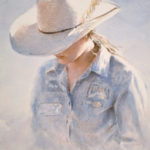 HOLLOWAY WAS born in Boulder, CO, in 1972 but grew up mostly in the Yampa Valley. As a youngster he enjoyed drawing, especially houses, and wanted to be an architect someday. Life was not easy for Holloway and his mother. “My mom struggled financially and moved us around to [live with] different family members,” he says. “In the third grade, I attended six different elementary schools.”

In the summers, Holloway recalls, the two would live in their car parked on a riverbank, or they would camp in the mountains. They chopped their own wood and hauled water, and Holloway says he used an outhouse until he was in high school. Sometimes food was scarce; he remembers his mother opening a McDonald’s dumpster one night to look for food. The artist says he isn’t uncomfortable sharing stories like these from his hardscrabble childhood. “The truth is the best, and it probably helps explain why I paint what I do,” he says.

On a positive note, Holloway says, his mother showered him with praise, always saying that he was her “masterpiece.” There were other good things, too: “I think one of my greatest lessons as a child was being allowed to get bored and figure out what to do on my own. I spent a lot of time in nature,” Holloway says. “We didn’t have a television, so drawing and creating were always a good way to pass the time. I always had a bicycle or skateboard and was able to roam as I pleased.” 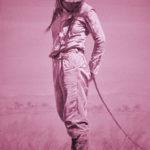 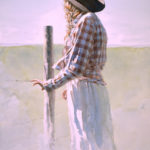 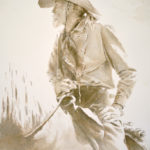 When he was 17, he moved into his own apartment and went to work full time—cooking, waiting tables, housekeeping, and anything else that provided a paycheck. Several years later, in 1992, he returned to Boulder, where his uncles owned a successful sign-painting business. That’s where Holloway learned elements of design and color, and in his spare time, he created his own drawings in pen or pencil.

He eventually married, and in 1995 the couple settled back in the Yampa Valley. For more than a decade he worked as a carpenter, building houses up and down the valley from Craig to Steamboat Springs. But in 2008 he suffered serious injuries while on the job. After two shoulder surgeries and months of physical therapy, he was forced to quit, unable to do the strenuous work. The couple sold their house, downsized, and as Holloway puts it, “My wife took the reins of bringing in a paycheck. I took over the housework, homeschooled our daughter, and started to paint again.”

Initially he struggled to learn the techniques of watercolor painting. Holloway credits a local artist, Jane Hume, with coming to his rescue. Hume sized up his situation and offered a bit of advice: “You need better paper.” One day she showed up at his front door with sheets of Arches watercolor paper as well as an armful of western art magazines, thereby setting the stage for a major turning point in his career. “I was painting still lifes and landscapes but searching for more satisfying subject matter,” he says. “The western art was like a light coming through the clouds.” 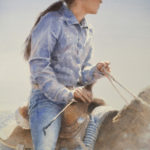 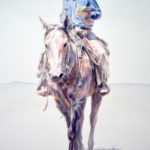 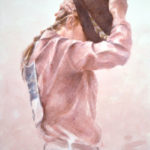 Holloway began participating in local art shows and eventually was asked to teach watercolor classes at Colorado Northwestern Community College in Rangely. When he wasn’t teaching, he continued to work hard in his studio, and his efforts soon yielded rewards: In 2012 he was juried into the well-regarded Mountain Oyster Club Western Art Show in Tucson, AZ, and a year later he was invited to display his works in the prestigious National Watercolor Society show.

TODAY HOLLOWAY lives on 7 acres just outside of Craig. His three children are grown, and he shares the empty nest with his wife Jennifer, three dogs, three cats, and 20 chickens. Recently he relocated his studio from the mudroom of the house to the historic Yampa Building in downtown Craig, a former elementary school. The room features tall windows that flood the space with light. Plants line the windowsills, and two cowboy hats hang on a post nearby.

On this August day, Holloway is considering some of the recurring themes in his work. He enjoys exploring the ideas of honesty, resilience, patience, humility, and beauty because he hopes to see these qualities in himself and in humanity in general. “Many of my paintings are also about feminine empowerment and strength,” he says. “I think it’s because I watched my mom struggle, and that is also a topic of the times we live in now. I tend to focus on images of women and children because my wife and kids are the driving force of my life.” 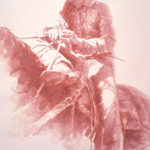 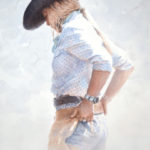 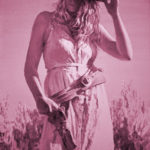 As this story was going to press, the artist had started work on his next project. The curator at the Museum of Northwest Colorado in Craig has commissioned Holloway to create the largest watercolor in the world, measuring 10 by 16 feet. The painting that currently claims that title, at 8 by 15 feet, hangs at the Massachusetts Museum of Contemporary Art. Holloway’s massive masterpiece will depict a cowboy on horseback galloping through a western landscape, conveying a sense of power and freedom. “I’ll paint the piece flat on the museum floor and tiptoe around it wearing two layers of socks on the area I’m not painting that day,” he says. “I may have to use my kitchen mop for the larger washes. I don’t know yet, but that’s what makes it fun.”

The museum will unveil the finished piece on Friday, December 4, along with a show of Holloway’s recent works. Shortly thereafter, he’ll return to the Coors Western Art Exhibit & Sale in Denver for the third year in a row; last year he sold all six of his paintings on opening night. Indeed, things are going well for the artist these days. Summing up his goals, he says simply, “Over time I hope that my body of work becomes a portrait of the western way of life and spirit that still exists here.”

MORE RESOURCES FOR ART COLLECTORS & ENTHUSIASTS
• Subscribe to Southwest Art magazine
• Learn how to paint & how to draw with downloads, videos & more
• Sign up for your Southwest Art email newsletter & download a FREE ebook