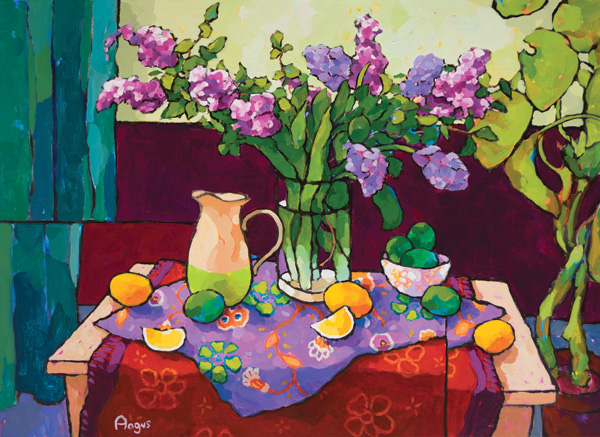 Still-life paintings by Angus Wilson convey to viewers the delightful impression that they’re experiencing the centuries-old genre in a new, contemporary way. Yes, the items depicted in his works are among those that painters have portrayed since at least the Middle Ages: flowers and fruit, plus objects they’re displayed in and around, such as vases, pitchers, bowls, tables, and tablecloths. But there the similarities end.

Conventional still-life works often render these objects in faithfully natural tones against dark or muted backgrounds. By contrast, an Angus painting (he goes by his first name alone) is as bold and vibrant as a stained-glass window in bright sunlight—and that effect is further heightened by the fact that each item is darkly outlined, an approach called cloisonnism that gained favor among post-Impressionists including Paul Gauguin. Meanwhile the colors themselves, though certainly based on nature, feel saturated and heightened to almost the point of hyperreality. 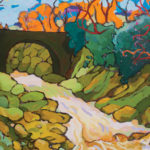 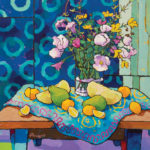 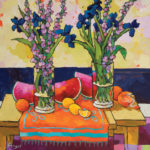 In addition, most of Angus’ works also contain a few bold horizontal or vertical lines that visually cut right through an object, the foreground, or the background, “refracting” the image, as the artist describes it, by slightly shifting the perspective. That shift, in turn, “elevates the work intellectually and makes you stop and look at these everyday objects,” he says, going on to sum up his motive for doing so: “When I approach any still life, I ask myself how I can create the most impactful, powerful painting possible, telling something new in an interesting way.”

Angus originally had no intention of becoming a painter. Born in 1970 in the city of Aberdeen in northeastern Scotland, he certainly did his share of childhood doodling, and his talents always leaned more toward aesthetic pursuits than academics. But his primary interests lay in animation, photography, and film, all of which he went on to study at the Duncan of Jordanstone College of Art & Design in Dundee.

Straight out of college, he embarked on a progression of jobs in graphic design, video production, and the early years of computer graphics, including creating what he jocularly describes as “hideous flying logos for corporate videos.” That range of experiences eventually led to a position in the late 1980s creating computer art for a British tech company that launched some of the earliest virtual-reality games for video arcades. In 1995, the company’s growth brought Angus to California’s Silicon Valley, where he progressed through a succession of ever-higher positions in the gaming industry. By the start of the new millennium, he says, “I had climbed too high and was sitting in a lot of executive meetings, art-directing from afar, not getting my hands dirty in a creative sense.” 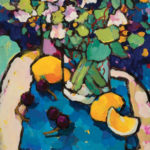 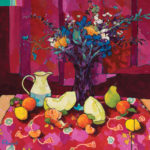 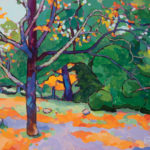 Meanwhile, despite his growing professional dissatisfaction, Angus’ home life was reaping rich rewards. In 2000, he married Lorraine, his girlfriend since they were both in their teens. By 2002, they had two very young sons, and increasingly the thought of working at home appealed to him far more than his high-powered Silicon Valley job. So, he says, “I fell into fine-art painting. It seemed like a good idea.”

He took inspiration from painters he had long admired in many different art movements, as well as works he’d first encountered on childhood visits to the Aberdeen Art Gallery and other museums in Scotland and England. Post-Impressionists including Gauguin, Toulouse-Lautrec, and Van Gogh had a definite influence. “I really loved cloisonnism,” he says, “drawing strong outlines of elements in a painting and using flat areas of color to define shape and form, which was inspired in the post-Impressionists by Japanese woodblock printing.” Colorists and Fauves like Matisse and Derain made their own mark on Angus’ contemporary palette, which is also informed by the bright, contemporary colors of San Francisco Bay Area painters like Richard Diebenkorn. And he never fails to pay tribute to Scottish artists including Arthur Melville, Sir Henry Raeburn, Samuel Peploe, and Joan Eardley, who created a distinctive and thriving local arts scene in their time. 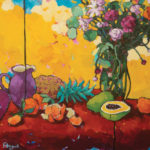 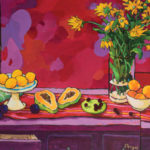 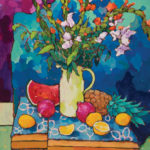 Angus, Blue and Orange With Poms and Pineapple, acrylic, 36 x 24.

Though Angus painted some landscapes early on (he estimates they currently make up 20 percent of his work), he focused more and more on the still life. “That’s where I found my voice,” he says. “I wanted to do something different from everybody else, evolving the medium to say something new, something distinctive. The paintings I produced were so exciting to me, like soul-searching. Still life tends to be an underrated subject, something cursory, forgettable. But it has so much
more to say.”

In 2003, Angus and his family moved back home to Scotland, settling in the town of Linlithgow just west of Edinburgh. However, he discovered that his home country was less than conducive to his new creative plans. “In Scotland, the gallery system is very much an old boys’ network,” he says, referring to the system still prevalent in Britain by which people succeed with assistance from others of the same social class or who attended the same private schools. Eventually, about a decade ago, the family returned to Silicon Valley, buying the two-story suburban home in San Jose where they still live and where Angus works, either in a studio he converted from an upstairs bedroom or in half of the garage that he has co-opted for larger works. “We got the mortgage, and I decided to knuckle down,” he says with a laugh and a touch of classic British understatement. “I chose to step it up a gear here, where you need to earn a bit more money to get along.” 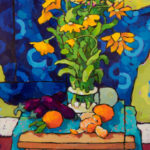 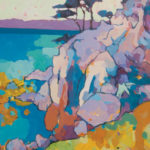 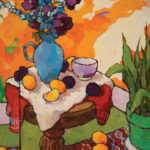 And he’s been getting along just fine, thank you very much, as they say in Great Britain. Since returning to the States, his work has gained representation at galleries in California, Colorado, New Mexico, Virginia, and Florida. Meanwhile, he has studiously avoided submitting his works to competitions or juried shows. “I’m a big believer in creating art as an insular personal journey,” he says.

That personal journey begins with an idea he’s exploring, often involving “little subtleties” of approach to his still-life subjects. For example, some of his recent works—such as hyacinth, limes, & lemons over purple and red [see page 73]—are part of what he refers to as his Two-Cloth Series, referring to the two overlapping textiles. “That gives me color patterns to play with and explore,” he notes. In similar spirit, THE MARK OF SOMETHING [see page 70] is from what he calls his Color Range Series, in which Angus aims “to increase the drama and unity of a painting at the same time” through a more narrowly focused family of colors.

Regardless of the subject or composition, Angus goes about creating a painting through a disciplined process. “Everything has to feel right from start to finish,” he says. He’ll decide on a subject matter, striving to choose “classical, instantly recognizable things.” Once he’s arrived at his composition, he’ll sketch it out on his iPad using software like Photoshop or Procreate, which enables him to compare different color choices in an instant. “It’s such a fast and adaptive tool,” he explains. “In the old days, I created a lot of little color pastel thumbnails. Now, rather than repaint, I can move a slider around and go through the whole color and chromatic range.” 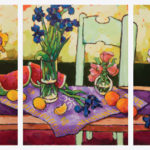 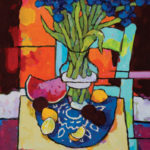 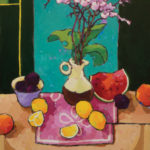 Once he settles on his final color choices, he goes back to the old-fashioned basics. “I personally don’t want to produce any final artwork on a computer,” he says. To allow himself a crisp, uniform surface for a painting, he’ll select a maple-veneer panel, which he sands, cleans, and gessoes. Then he’ll paint the bold contours and refracting lines of his composition. Next comes an underpainting of colors that are complementary to the main ones he’ll use for each object or background area: blue under something that will be red, for example, or mauve under orange. Finally come the main colors, with his brush strokes deliberately leaving “little chinks” of the underlying colors to show through. “I jokingly call it lazy pointillism,” he says, referring to the technique in which tiny dots of color are applied to the canvas in such a way that, viewed from a distance, they blend to form vibrant, luminous images.

With few exceptions, Angus works exclusively in acrylic paints, which he layers thickly. The quick-drying medium enables him to achieve more efficiently the vibrant, pure colors he intends. “When I use this approach with oil,” he says, “it’s just slower painting.” 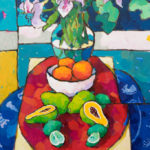 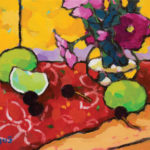 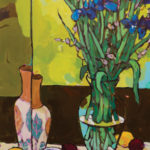 Angus has absolutely no intention of slowing down. “There’s never a shortage of ideas,” he says, and he’s not someone who feels the need to take a break to “rejuvenate my batteries. I’m an artist who likes to keep painting, to evolve what I’m doing today into something new. And there’s always something new that I want to do, new projects and paintings to explore that really get me excited.” 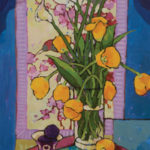 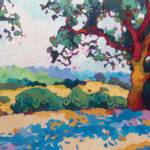 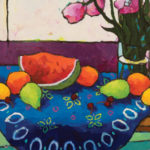