William Alther paints wildlife and the majesty that surrounds it 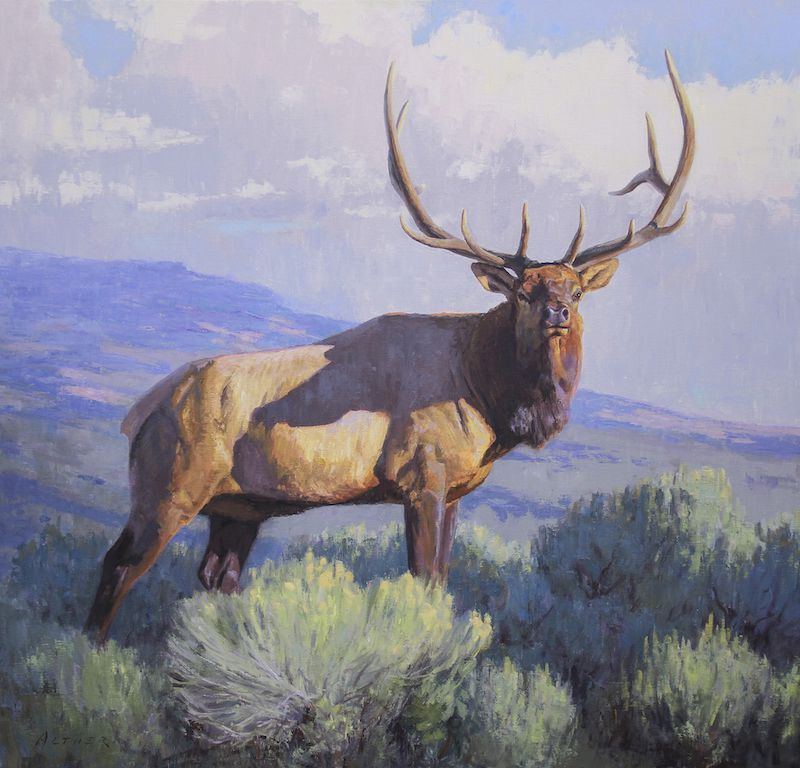 “I’ve always been fascinated with animals,” says Denver artist William Alther. “It’s a natural thing for me to express in art.” Throughout his life, this fascination has manifested itself in a desire to create something eye-catching and amazing. Alther paints to share his innate love of the land and its fauna, to define and record his experiences in the field, and to bring them to life in two dimensions. He preserves each majestic scene in colorful, light-drenched compositions that present naturalistic depictions of their subject matter while also evoking the full sensorial experience of time and place and living, breathing life forms.

Growing up in Midland, TX, Alther explored the outdoors as children often do, running, playing, and chasing after the occasional snake as it slithered by. “I was always really interested in wildlife and the natural world,” he says. Along with an early love of nature, he also had an affinity for making art. He enjoyed drawing and doodling as far back as he can remember, and the desire to create only grew as he did. He showed a marked aptitude for art in elementary school, which led his mother to enroll him in private painting lessons.

What the artist refers to as “occasional dabbling” continued throughout his childhood and adolescence, and by the time he was in high school, Alther had expanded his efforts into woodworking. After attending a lecture given by Perry Holley, a noted West Texas craftsman known for his naturalistic wood carvings of birds, 15-year-old Alther became inspired to translate his own interest in wood into avian depictions as well. “I was astounded that you could do that,” says Alther. When he approached Holley after the lecture, the veteran wood carver simply told young Alther to “go home and get after it.” And he did. Over the following years, he honed his woodworking craft and gained wide recognition throughout the region for his bird carvings. 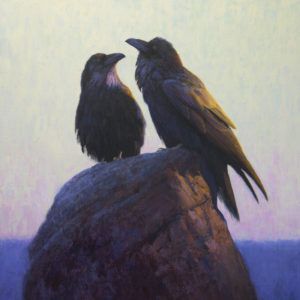 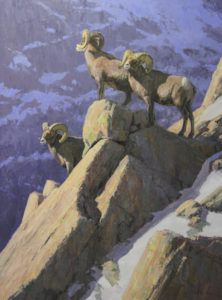 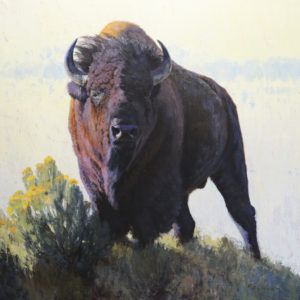 Alther continued producing bird carvings during his college years but focused his academic studies on nature and animals, not art. In 1981, he graduated from Texas A&M University with a degree in wildlife and fishery sciences. By the time he left school, the young carver had a backlog of several years’ worth of commissions, and since jobs in the wildlife biology field were scarce at that time, he continued to focus on his art.

In 1991, Alther moved to Denver and began working at the Denver Museum of Nature & Science as a collections manager in the zoology department. “It turned out that my degree in wildlife biology really paid off,” he says; he stayed in that post for 13 years. He continued to make art on his own throughout his tenure at the museum and eventually rekindled his interest in two-dimensional work as well. In addition to drawing on his own, he also took a color theory class. It proved to be the launching pad for a new direction in his creative life. “The assignments for the class gave me the bug to paint,” says Alther. “A switch flipped in my mind.” From that point on, he devoted his creative talents to painting. Of course, his reverence for wildlife would take center stage in that arena as well.

While still working at the museum, Alther started to network with artists who used its collection of wildlife specimens as reference material for their work. He took several painting workshops from local artists, including T. Allen Lawson and Kevin Weckbach, and participated in high-level critiques with fellow Denver artist Mark Daily. “He set the bar high for me,” Alther recalls. Alther continued to “get after it,” as Perry Holley had inspired him to do years earlier, and soon he was selling and showing his work in exhibitions, earning recognition as a wildlife painter. 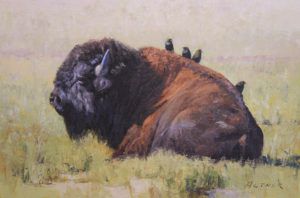 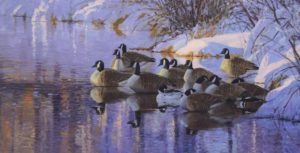 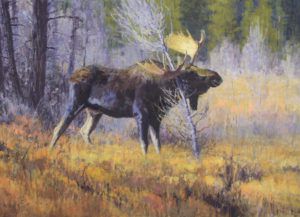 In 2004, Alther transitioned into life as a full-time artist. With the full support of his wife, he set up a studio in their Denver home, where he continues to work today. Being in Colorado provides him a central location for observing the wildlife he likes to paint, and he frequently takes short day trips around the state to find subject matter and inspiration. He travels farther afield several times a year to visit the Tetons or Yellowstone, where wildlife encounters are “as sure of a thing as there is.”

With his camera at the ready, Alther explores wild spaces, photographing the landscape and whatever animals he encounters as he goes. Sometimes he searches for one animal in particular; sometimes he leaves it up to fate. Red foxes, pronghorn antelope, buffalo, rabbits, and a variety of birds are among the many wild animals that appear in Alther’s paintings. Often giving the viewer an intimate glimpse of their subjects, the compositions reveal both the artist’s personal connection to the animals and each one’s individual character. A moose visibly relieved as it rubs against a tree, a polar bear basking in ice-cold rays of sun, or a group of bighorn sheep gazing into the distance all create a dialogue with the viewer, not only as visual elements but as living things.

Always looking for the next compelling scene, Alther constantly searches for new places to explore. (In fact, he keeps a bundle of supplies at the ready for spontaneous trips.) “I love taking the back roads and seeing what’s around the corner,” he says. He considers his fieldwork crucial to creating successful paintings and works en plein air whenever he gets the chance. “That’s as much of an education as anything. That’s where you really learn,” he says. 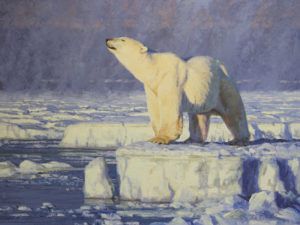 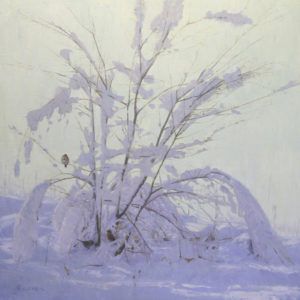 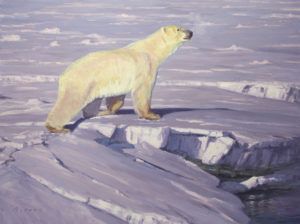 “Getting outdoors is crucial to my sense of well-being,” Alther adds. “Experiencing the landscape and wildlife first-hand is wonderful and exciting. It is also the foundation for generating paintings. It’s where the ideas come from. It’s also where the information necessary to execute the ideas is collected, through plein-air painting, photography, sketching, and just simple observation. All of these things, along with additional sensory perceptions such as the way a place sounds, feels, smells, and so on, are valuable if not essential ingredients for doing convincing paintings in the studio.”

As much as Alther relishes capturing animals, the landscape and atmosphere that surround them act as the foundation of every painting he makes. “I’m really drawn to light and shadow,” he says. “Any subject can be good if it’s got the right kind of light hitting it. That, more than anything else, is what I’m after.” To that end, his compositions are rooted in heady contrasts, shadows or patterns cast on solid surfaces, and light as it passes through clouds, blankets open land, or bends around a mountainside.

This is especially true for winter scenes. Though Alther paints in all four seasons, he is especially intrigued by the wintertime. He loves finding interesting patterns of light and shadow on the pristine ground, or depicting the transformation of a twiggy bush into a sculpture under the weight and texture of snow. Further, he is fascinated by the complex color story found in the whites of the season: swan feathers, mountain goat fur, and of course, snow itself. “There’s a rainbow of colors you can’t always figure out,” he says of the many nuanced shades and tints that make up the wintry hue. However, he likes the challenge that presents, as it allows him to master his understanding of how light reflects and refracts, emits and absorbs color. “I’m always working at getting the cleanest paint mixtures, the most luminous color I can get,” he explains. “That’s what can give a painting a greater sense of being true to life.” 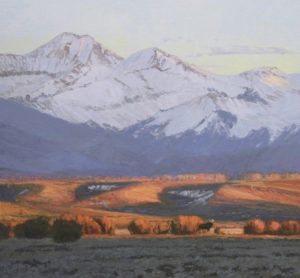 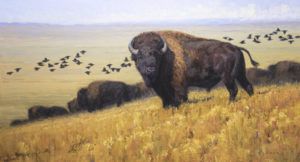 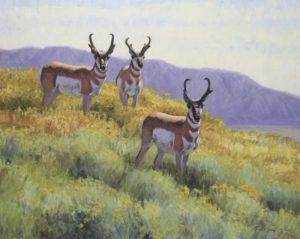 Describing his drive to make art, Alther says, “It’s mostly visual.” Simply put, the artist paints things because he likes the way they look. He wants to communicate the brilliant light, rich colors, and natural beauty of place, bringing both elements and spirit to life on the canvas. He channels other sensory elements as well, however, which contribute to the life of each piece, adding layers of perception and accessibility. One of these is music, and it has played a continuous, significant role in his life, whether as creative outlet or influencer.

Alther played drums in a classic-rock cover band that performed throughout West Texas in the late 1980s, and listening to music is part of his artistic process today. “Certain types of music create a visual for me,” he says. Sometimes that visual informs the direction a new painting takes, and other times the music adds depth to an already existing composition. Invariably, whether rock, pop, or even classical music, the sounds energize the artist and enhance his creative flow.

By infusing his work with various sensory influences, Alther strives to elevate his paintings above literal representations, to give them that ineffable quality that makes them “have life.” That’s his ultimate goal, and that’s what he will continue to “get after” as he explores the wilds of the western U.S. and captures its inherent beauty in paint. 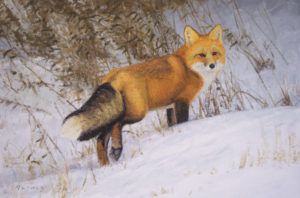 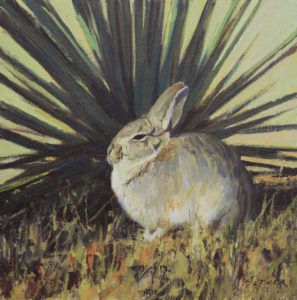 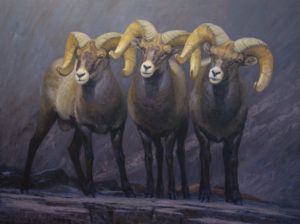 This story appeared in the June/July 2021 issue of Southwest Art magazine.