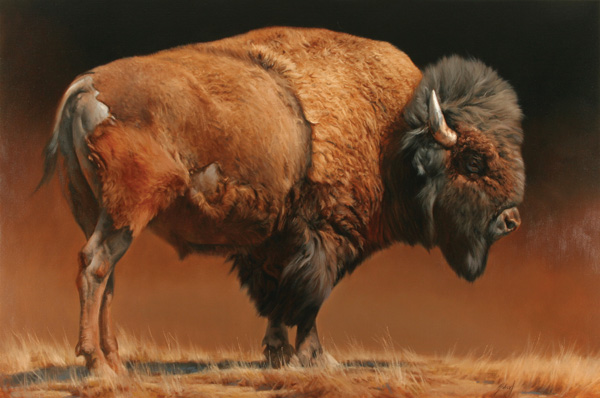 EDWARD ALDRICH was barely out of kindergarten when he first heeded nature’s irresistible call. “My mom, who passed away last year, vividly remembered me going down to a little stream running in the back of our acreage where we lived in Westchester County, about an hour north of New York City,” he says, his voice softening at the briefest mention of the woman who “was always my greatest support.” Sketchbook and crayon in hand, young Ned focused on a wild trillium plant he found near the stream, replicating in detail its flowers and leaves. “She said that she’d never seen anything like such an inclination to observe and draw. That’s all she knew of me from then on. There were always crayon drawings taped or tacked to the walls of my room.”

Those first signs foretold a future that would see Nancy Aldrich’s son grow up to become one of the nation’s most respected wildlife artists. His realistic yet evocative oil paintings of birds and beasts from across America and around the world reside in top nature-focused collections including those of the Arizona-Sonora Desert Museum in Tucson, AZ, and the Leigh Yawkey Woodson Art Museum in Wausau, WI. They have won Aldrich awards from major shows, including People’s Choice in the Western Visions Show & Sale at the National Museum of Wildlife Art in Jackson, WY, along with membership in the prestigious Oil Painters of America.

His mother’s sensitivity to Ned’s passions, meanwhile, fostered in him an ever-questing mind and spirit that sees his work evolving to this day. “I’m one of those people who is captivated by different styles, techniques, and ways of working. I have so much interest in what’s next, what captures my imagination, what’s waiting for me to explore.” 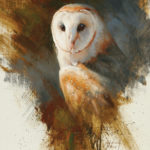 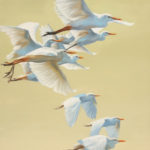 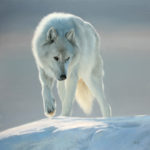 ALDRICH’S early artistic explorations sometimes ranged far beyond the natural world. Through grade school and high school, they occasionally included “periods of sports figures and spaceships and aliens.” But those were mere digressions. “I always went back to the animals,” he says of images he usually created using photos from books as reference material. “There was something very peaceful and grounding about them.” While still in grade school, he completed a painting he still has today of a deer in a mountainous aspen setting. Still, he marvels, at the time, “I didn’t know there was anything called wildlife art.” That didn’t stop him, during high school, from making his own high-quality prints of lions and tigers, which he sold to kids and parents and teachers. The success supported his growing realization that “there was some possibility for this” as a career path.

The family had moved to Colorado’s Front Range when Ned was 10, and at 15 he entered the Colorado Springs School, which provided him with a key formative experience. “As a private high school, it was on a block system that allowed one-month seminar experiences,” he says. “When I was 16, I took a trip with a professor and a group of about a dozen students to Liberia and the Ivory Coast. The crescendo was a visit to a game park, where I remember seeing lions and hippos and other wild animals. That solidified my love of wildlife. I thought to myself that this was what I wanted to do, combining my love of this experience with my love of painting.” In the 39 years since, Aldrich has returned to different parts of Africa four times, gathering reference photographs and inspiration for his work.

Not that his high-school years ran entirely smoothly. Though he and a few fellow students were known as the class artists, one teacher in particular did not appreciate Aldrich’s realistic approach. Holding to a viewpoint still prevalent in art education that aesthetic pursuits should be all about self-expression at the expense of realism, the artist recalls, “he said that what I was doing was not art, and I was the one person he juried out of the school art show.” Rather than discouraging him, however, “it lit a very intense fire under me to show him up.” 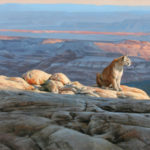 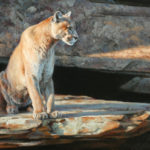 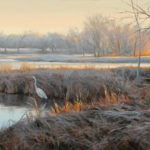 Aldrich found a far more hospitable environment when he attended a monthlong summer art program between 11th and 12th grades at the Rhode Island School of Design in Providence. “I was in my element,” he remembers. “I just loved it and knew that was exactly what I wanted to do and where I wanted to go.” To the dismay of his high-school counselors, but with the full support of his mom, he applied only to RISD. “Luckily, I did get in,” he says.

After four years of “amazing experiences where I drew and painted for hours and hours and hours,” he graduated in 1987 with a Bachelor of Fine Arts in illustration. Before he left, though, he was one of the young talents juried into an emerging artists competition put on by American Artist magazine, for which his work was selected as the cover image. “That officially proved my high-school teacher wrong,” Aldrich adds with a chuckle.

Fresh out of RISD, and with considerable experience already selling his works back home in Colorado, Aldrich was ready to embark on a professional career. Soon after graduating, a Colorado Springs gallery gave him a large one-man show featuring about 20 paintings, many of which sold. Even with the economic downturn in the late 1980s and early ’90s, he got by, supplementing his fine-art income with illustration work for clients including greeting-card companies and—perhaps appropriately for a wildlife artist—Wild Turkey bourbon.

Along the way, he enrolled in outdoor-painting workshops taught by masters of landscape and nature subjects including Clyde Aspevig, William F. Reese, T. Allen Lawson, and Robert Bateman. “College was a broadening of the mind for me,” he explains. “These other courses honed me into having an expression for my art that is more than just simple realism.” 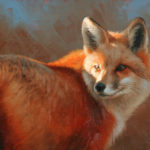 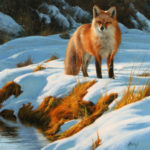 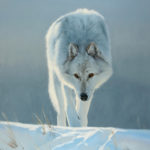 He began to promote his art in the most straightforward way imaginable: “I contacted all the galleries I could, sent out information, and slowly, organically started to get into different places.” He also began submitting his paintings to juried shows, focusing particularly on the esteemed Birds in Art annual event at the Leigh Yawkey Woodson Art Museum. “The first couple of years that I submitted, I didn’t get accepted,” he says. But he persisted, getting juried in for the first time in 1989. “That was monumental, about as good as it gets,” he enthuses. “I was shoulder to shoulder with all the big names from around the world.” It was the first of 17 appearances there for Aldrich.

MORE THAN three decades on from those initial successes, Aldrich continues to celebrate a wide range of animal subjects. He pursues this passion in the light-filled studio he’s added atop his home in the foothills near Golden, CO, which he shares with his wife Kerry, their 15-year-old son, and their 13-year-old twin daughters. His love of creative exploration pushes him to keep his work fresh and intriguing to an audience that innately senses the deep connection he makes with his subjects.

Consider, for example, the mountain lion he depicts in SINGULAR FOCUS, a painting recently shown at the Western Visions show. Aldrich painted it with lots of impasto, using big brushes and even a palette knife to apply his oils when capturing the cat’s fur and the surrounding rocky outcrop-ping. That approach allowed him to “build up real texture that bounces light off the canvas and reaches the eye, giving the painting a whole new dimension. That’s something new that I wasn’t all that interested in for the first 30 years or so of my career.” 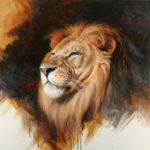 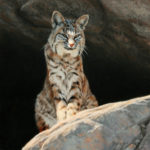 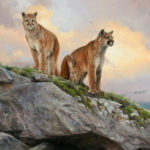 Even when he uses his paints more sparingly, as in pieces like BARN OWL, Aldrich has taken lately to revealing glimpses around the edges of the canvas of his underpainting, a preliminary layer of dynamic, abstract brush strokes that provide usually unseen energy. “Juxtaposing realism with the energy of the artist gives people a peek behind the scenes,” he says. “A slow, controlled stroke will look very different than a swath that comes from your shoulder, and people will feel what went into that stroke. I’m really interested right now in how randomness can create a sense of reality, giving the painting an energy that can make it look so real and so painterly at the same time.”

Still, about 80 percent of Aldrich’s works, he estimates, are straightforward animal portraits that present “more closely centralized” representations of their subjects, with just a suggestion of their natural surroundings. “After 40 years of painting,” he says, “I’ve done hundreds of portraits of red foxes or wolves. But when I start one, it’s still always something new, providing me with energy and joy and the ability to explore my subject. I still love to paint those animals.” 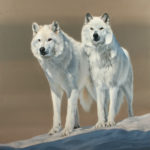 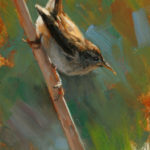 END_OF_DOCUMENT_TOKEN_TO_BE_REPLACED

Great Advice and Inspiration for Artists
Save on subscriptions to your favorite magazines!